A stable bee population should be a major concern for agricultural cities like Woodinville, according to experts at sustainable agriculture collective 21 Acres.

Great article about 21 Acres’ #BEEvesting program in the Woodinville Weekly last week! In case you missed it, read on below…

A stable bee population should be a major concern for agricultural cities like Woodinville, according to experts at sustainable agriculture collective 21 Acres, and a new program there is making bees a priority.

The staff at 21 Acres launched the #BEEvesting program in early April to not only educate the Woodinville community on bee hospitality, but to also expand what is known as the Pollinator Pathway, according to 21 Acres’ public relations consultant, Brenda Vanderloop.

“Bees, especially our native bee species that we have about 600 of here in the Pacific Northwest, are really at the crux of the health of our ecosystem,” says Olivia Shangrow, biologist and operation specialist for 21 Acres’ main beekeeping kit supplier, Rent Mason Bees. “Not only are they helping us produce more fruits and vegetables that we can eat, they are also important for pollinating our native trees and shrubs around the area.”

In an American diet, one out of every three bites of food is linked to honeybee pollination in some way or another according to the Natural Resources Defense Council. However, because of pesticides, urbanization, climate change and disease, bees are dying at an alarming rate. Since 2006, 40 percent of the US commercial honeybee population has perished.

Before becoming nationally known, the Pollinator Pathway was created in Seattle in 2007 by founder Sarah Bergmann. The nationwide project aims to connect two or more green spaces through a pollinator friendly passageway, according to Bergmann.

Participation in 21 Acres’ Woodinville pathway ranges from growing pollinator friendly plants around your neighborhood to sponsoring a community garden, or even looking into beekeeping as a hobby. The sustainable agriculture collective contributes by housing Pacific Northwest native mason bees, putting out wasp traps, crossbreeding certain bees for optimal genetics, and installing mason bee boxes that encourage bees to build their hives.

Honey bees have a small range that they can travel, around 300 feet in any direction, so it is challenging for wild bees to navigate in areas like Woodinville that gradually become more metropolitan, according to Shangrow.

The City of Woodinville Capital Improvement Plan for 2019-2024 expressed intentions for industrial expansion with a new 800-unit multi-family and mixed use development called Woodin Creek Village. According to the document, this project will increase pedestrian and vehicle traffic in the downtown area throughout the next six years.

“With the introduction of a Pollinator Pathway, the bees have a place to go to instead of a parking lot,” says Shangrow.

The pollinator program also brings in volunteers from the community to help with beekeeping on the farm. Volunteers help with setting up bee boxes and 21 Acres’ educates them on bee conservation in return.

Local farmers are encouraged to participate as well. Andrew Ely, farm and education manager at Viva Farms, sees the potential of the #BEEvesting program as a starting point to a larger environmental impact.

“Step one is the easy Mason bee introduction,” says Ely. “And then step two is let’s create some habitats for not just Mason bees but all other insects, like spiders and fruit flies that help pollinate as well.”

Similar bee conservation programs like Seattle-Tacoma International Airport’s Flight Path, were proven effective. The airport utilized portions of its unused open space to give a home to 24 honeybee hives and successfully increased honeybee populations in the area by 70 percent after just five years.

The #BEEvesting program at 21 Acres’ shares similar goals. With the help of their staff, local farmers and community volunteers, they want to link together green spaces both for the bees and for the Woodinville community, according to Vanderloop. 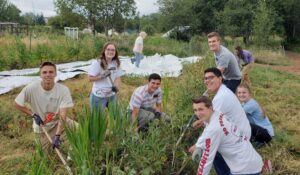 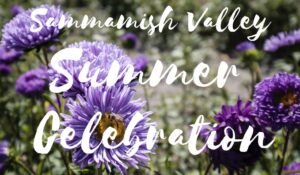