This post was written by Barry Febos, Energy Manager & Educator.

In December, we talked about our all-electric refrigerated box truck in order to help farmers get food to market without negatively impacting climate change. My first look at the truck with the rest of the 21 Acres facilities team blew me away.

Promoting a vision of a carbon-neutral local food system is a top priority of our nonprofit. This innovative project seeks to highlight the intense energy infrastructure that the food system relies upon by demonstrating one example of a sustainable alternative.

We took a portion of the day to meet with the project’s mastermind, Stephen Johnsen, in his shop. I’m not sure if I was more impressed with the high-tech transformation of this classic vehicle or with Stephen’s incredible depth of knowledge, but by the end of the next couple hours my head was swirling with more technical detail in such a short time than I could have imagined, even during the rigors of my graduate degree in sustainable technology. I was hooked.

As the City of Seattle and Washington State move to electrify buses and transportation, the movement also grows nationally, with 15 states (including Washington state) and Washington D.C. committing to selling only zero emissions commercial vehicles by 2050. Many of these states have previously enacted zero emission policy for passenger vehicles like last year’s all-electric by 2035 commitment in CA and with renewed support from the White House, we now see a 2035 EV commitment from General Motors. 2035 commitments have also taken hold internationally in China and the UK.

Spurred on by organizations like Seattle-based Cultura, the EV movement here in Washington is truly taking off. Our hope is that the 21 Acres truck will be a ‘vehicle of change’ that highlights the interconnected systems and communities which can be uplifted by climate solutions in the local food system.

The birth of the electric truck project

Although transportation is not the largest source of agriculture-related emissions, it is significant. After an unsuccessful quest to find sustainable transit options to limit the carbon emissions from this transportation-heavy venture, the vision for the electric truck was born.

At the time when we were researching transportation solutions for the food hub, the companies that were developing small to mid-size electric trucks were undercapitalized and going bankrupt from lack of funding. Instead, we considered biodiesel options, renewable natural gas-powered trucks and even a retired Frito-lay all-electric truck made by Smith Electric. (Fortunately, investment in electric vehicles is much improved in recent years and there are some exciting developments on the horizon.)

While conducting initial research for the electric truck project, we met Patrick McCue, who runs the Northshore Automotive Technology center at Bothell High School. He had recently worked with a group of regional students to build an an electric car (the “Shock and Awe”) that set a quarter mile drag racing world record for electric vehicles in 2016. Patrick introduced us to Stephen Johnsen who he had worked with on this groundbreaking project.

Stephen is an EV wizard and true craftsman. He has worked on a number of EVs for prominent auto manufacturers through his company High Performance Electric Vehicles (HPEV) including the official Chevrolet electric drag racer, the Camaro eCOPO which he, Patrick, and Jeff Lane of Hancock and Lane Racing teamed up for. He is also the former president of the Seattle Electric Vehicle Association and an integral part of the local electric vehicle community. Stephen listened to our goals for transportation and education – hearing first and foremost that we were concerned about climate change. We wanted an electric truck if at all possible and were willing to have one built if need be.

Stephen proposed the ultimate reuse-recycle project using the body of a 1954 GMC fire truck and three battery packs from decommissioned electric cars. The project is a head-turner for sure. The frame of the truck is from a 1993 GMC truck and the refrigerated box is a highly insulated unit, built by Summit Body and Equipment in Portland, Oregon. In addition to the three battery packs the truck includes other cutting-edge parts from Tesla, Borg Warner, GM, Cascadia Motion Systems and more. 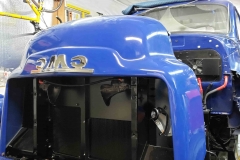 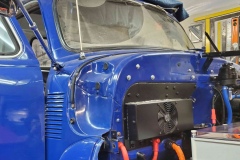 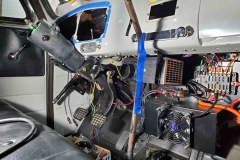 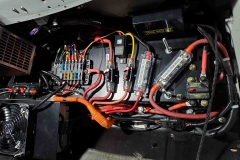 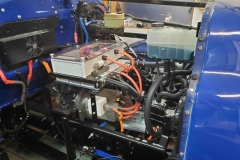 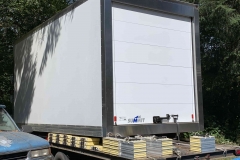 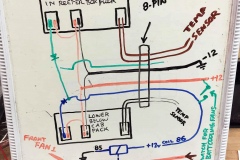 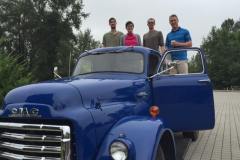 Current status of the electric truck

The project is now in its final stages thanks to Stephen’s truly tireless dedication as well as the support of volunteers. During this push toward completion, we recently partnered with UW Bothell’s Mechanical and Electrical Engineering departments to support this project and create a special learning opportunity as part of their Capstone Program.

I now have the pleasure of working with one student team from each department (9 students in total) to support Stephen on the design and installation of unique battery enclosures as well as corresponding battery cooling, charging, and refrigeration systems. It’s been energizing to be able to involve students in this work, and we’re all looking forward to seeing the results this spring as the school year wrap up. (21 Acres has partnered with UW Bothell’s engineering program in the past. Learn about the off-grid solar refrigeration project for farmers in the Sammamish Valley.)

The electric truck project addresses the highly visible aspect of moving food while also pointing to solutions for the transportation sector and refrigeration. Our hope is that the truck will be used to further the local food economy’s reach and bring attention to the type of sustainable infrastructure that’s needed for these projects in the future. I’ve had a blast getting to know the ins and outs of this truck and working on design solutions along with Stephen and the engineering students. If you have an interest in getting involved, we still use all the hands we can get; please check out our call for volunteers.

Electric trucks in the food system

Where might you be able to see this awesome truck once it’s finished? On the road doing its thing with partners like Farm Stand Local Foods.

After working on the successful Puget Sound Food Hub project, some staff members from 21 Acres went on to launch Farmstand Local Foods providing similar services to small farmers in King County and linking them to restaurants, schools, grocers, hospitals and other wholesale buyers. Farmstand is now a seasoned and very successful company serving a critical link in the local food supply. We anticipate the electric truck will help this dedicated crew lower their carbon footprint while at the same time increasing their distribution capacity for the farmers they serve.

Barry Febos is our Facilities Energy Manager & Educator. He is a skilled sustainable technologist and ecologically minded jack-of-all-trades. Barry has an MS in Appropriate Technology from Appalachian State University where he developed regenerative energy and soil building systems for resource-limited local farmers. He has diverse work experience ranging from the design, construction, and analysis of renewable energy systems and buildings to cooperative business management, writing, art and education. Barry conducts free tours of our LEED Platinum building and can often be found performing repairs, installations, and analyses around campus. Barry enjoys exploring the woods, discovering new music, foods and ideas and sharing as much of this as he can with those around him. Don’t hesitate to pick his brain anytime. For Barry, a perfect day ends with a fresh plate of ravioli and a good movie.