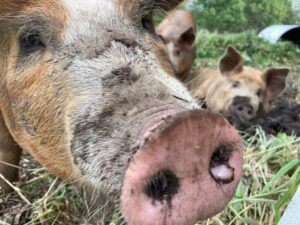 Greetings! My name is Masra Clamoungou. I’m blogging about my sustainable pork venture this summer at the 21 Acres Farm. To read my first blog post, click here.

As a first-time livestock farmer, it is easy for me to see why raising animals on pasture just makes sense; when I see one of my pigs running around and thrashing the giant branch it just picked up, like an ecstatic dog on the beach, I know all is right in this little corner of our world. It gives me a wondrous sense of gratitude to be able to raise these pigs in an environment where I can witness these expressions of joy and play. However, when we zoom out, the average life story of a pig is very different.

The vast majority of pigs being raised for meat are viewed as units of production within a highly engineered system of birthing, fattening, killing, cutting, and distribution. Massive facilities are erected to hold hogs by the thousand; corn, soy and other commodity grains are milled into feeds optimized for maximum weight gain; and when the time comes, finished hogs will be trucked to a meat packing plant where workers face unsafe conditions due to the immense volumes of meat and the speed of the processing line. With all the energy put into optimizing these processes for economic efficiency, the comfort, health, and dignity of the pigs and the workers are left to suffer.

Within a conventional system of pork production, there simply is not enough consideration or care for pigs to live a happy and stress-free life.

Let’s zoom back in to our corner of the world. There are two primary benefits that I see in raising pigs on pasture, as I’m doing now on the farm. I already touched on one briefly: the expression of natural pig behaviors. Watching that pig run around and thrash a branch back and forth in its mouth is a clear expression of joyful play. When not playing or munching on branches, the pigs spend much of their time engaging in other behaviors like rooting (for food, or to dig wallows and bedding areas), or exploring the pasture features with their noses and mouths. Because factory-farmed pigs aren’t given access to these natural features, they are often forced to resort to unhealthy behaviors to compensate. Simply put: Pasture raising is better for the pigs’ quality of life.

“Grazing of grasses and consumption of oil-rich nuts such as peanuts, acorns, chestnuts, and hazelnuts has been shown to increase the levels of polyunsaturated fats (PUFAs), the omega 3/omega 6 ratio, and the levels of tocopherols (vitamin E). These all contribute toward a healthier pork for consumers while also making the meat less likely to go rancid and better for dry curing.”

In addition to the grass and other forage the pigs get from the pasture, my pigs are being fed a mix of local Organic barley, wheat, and peas which were grown and milled by Hidden River Farms in Montesano, WA. Peas are an attractive alternative to soybean meal for feeding livestock–unlike most soy and corn alternatives, peas are a great source of protein and the amino acid lysine. 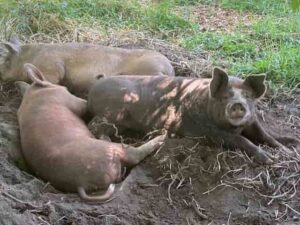 Raising pigs on pasture provides a healthy and engaging lifestyle for the pigs, a more nutritious and flavorful end product for the pork consumer, and an opportunity to engage with the local agricultural economy. My experiences so far with raising these pigs have given me a deep respect for the roles that pigs can play: as elements of the farm’s agroecosystem, as companions during trying times, and ultimately as food that will nourish body and soul. 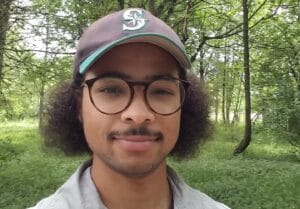 Masra Clamoungou was born and raised in the South End of Seattle, and has spent the last five years learning about and working in sustainable agriculture. Until recently, he was attending Sterling College in Kentucky pursuing a degree in Sustainable Agriculture. At the moment, he is passionate about pigs.

If you would like to learn more or support Masra’s pigs and future farming ventures, you can follow/donate at these links: 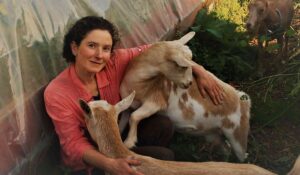