Meghan has been perfecting her turnip gnocchi recipe and she demoed the tasty creations in the Farm Market the last two weeks — yum!

We are always looking to find new interesting ways to use local, seasonal produce. Things can begin to get tired by mid-January. I found a turnip gnocchi recipe on the Lustful Vegan’s blog, in my preparation for Market Demonstrations and was very inspired.

It turns out making gnocchi is very simple, but a bit time consuming. This is a meal to prepare with your children, as I think most would enjoy grating the potato, helping to roll out and form gnocchi. After roasting the potato and turnip mixing, rolling, formation, and boiling should take 35-45 minutes.

Since I have never made gnocchi before, this was a learning curve. I had some great guidance from the 21 Acres kitchen team and of course, tasters in the Market. The first time I used bread flour and kneaded it- I mean kneaded it — A LOT. I worked an entire additional cup of flour into the dough. An advantage to using the bread flour is it has a higher gluten content, which equals a better chance of success. The result was firm, bready tasting pasta, gnocchi thing. Edible, yes, worth repeating, no. So in my next trials I used the Farm Market’s All-Purpose Flour from Bluebird Grains and had success.

After playing with the turnip to potato ratio, I came to about a third part potato, two thirds turnip. The roasty, steam to the turnips gives a sweeter flavor. Turnips can be bitter, which is another reason to salt dough liberally.

Additionally, something to thing to keep in mind, is to handle the dough as little as possible. The less the gnocchi is kneaded yields a more tender final product. My mantra was “light and fluffy as little pillows.”

It is difficult to describe how to roll pasta over the folk to give it ridges for sauce or oil to lay in, so I found this helpful YouTube video.

I hope you feel inspired to try something new! Don’t forget to swing by the Market on Friday or Saturday at 12:30 pm to learn something new. Let us know if you try this recipe!

See you in the Market,

1 cup flour, plus more for rolling

1 tsp sea salt plus more for water and garnish

Preheat oven to 400 degrees. Place turnips in a baking dish, cover with foil. Wash and punch potato with folk. Bake for 45 mins to 1 hour until folk slides out smoothly from the potato and turnips are soft. Remove from oven.

Place egg, flour, salt, pepper and herbs in a large bowl. When potato is cool enough to handle, remove skin and discard. Put potato through a ricer or use the finer side of a box grater right into the bowl.

In a small bowl, use a spoon or folk to scoop turnips out of peel. Smash turnip with folk. If you have a ricer, place turnips in ricer, avoiding pressing excess water from the turnips into potato, flour mixture.

Gently mix, just enough to form a ball. Divide in half. On a lightly floured surface knead about 3-5 times- just enough to get the mix to be able to roll. Roll to about ¾ inch diameter. Cut into 1 inch pieces. Roll gnocchi over the back of a folk to give its signature ridges. Place in salted boiling water. Cook 30 seconds after they begin to float. Repeat until all dough is used.

Serve with your favorite pasta sauce or garlic infused oil. 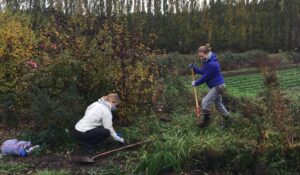 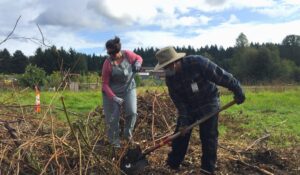