The past two weeks have been a tense time for the budding teenage chefs-in-training from the Cultivating Cooks, Session 1 class. Last Tuesday evening, the 12th, was the Iron Chef competition, a time for the students to collaborate with a partner and put their new-found skills to the test.

At the prior cooking class, the students had been randomly assigned as partners, then given a list of foods that they would have available to use in their dish. The foods are all locally sourced, seasonal and organic. They were also told there would be one mystery ingredient that they would find out the night of the cook off. The judging itself would be based on uses of the ingredients, flavor, presentation, team cooperation, and cleanliness. The judges were the instructors, the parents and the other students. The instructors would be on hand to assist anywhere needed. As soon as the assignments were made, the partners were buzzing with ideas as they left after class.

The next two weeks were spent deciding on recipes, then preparing the recipes for taste testing, practicing the necessary techniques for creating their dishes and figuring out how to make their creations stand out and look great. On the big night, everyone arrived early and eager to go to work. Two students had already picked the blackberries on the farm that they would use in their food. Chef Bri and Aaron got everyone settled, gave instructions and set a timeline for food gathering, dish gathering and food prep and cooking, then told them the secret ingredient-eggplant! By the time was up there were four totally different and totally amazing dishes on the table for judging.

Each duo, and one singleton, had easily incorporated the eggplant into their creations, feeling that the eggplant had made their dishes even better. Did you know that adding eggplant to muffins make them more dense and flavorful? Did you know that eggplant makes a great savory topping for pancakes? Those were great discoveries made by our creative cooks!

While the chefs-in-training were cooking I was talking to parents about how the lessons had been incorporated by their children at home. All the feedback was positive, ranging from now knowing very safe knife skills, gaining confidence in the kitchen, food choices and food preparation, working cooperatively in the kitchen, choosing recipes that would use locally sourced foods and the willingness to try new foods. They were looking forward to further learning for their children in the next set of classes.

Finally, the moment of truth arrived and the dishes were divided into bite sized portions for all the tasters. There were fritters, salads, 2 kinds of muffins, each with different toppings and different presentations, and pancakes with two toppings-one savory and one sweet. Check out the pictures of these awesome creations. Of course, picking a winner was impossible. Creative suggestions as to better presentation were the only remarks, other than “beautiful”, “yummy”, “such good flavor combinations”, “I would not have thought of using the eggplant that way”, and “it is perfect”!

The enthusiasm was infectious and everyone went home well fed and happy with their creations and what they had learned over the past five classes.

Stay tuned for next week’s post after Creative Cooks, Session 2, has the Iron Chef competition and wow’s the staff and parents with their ideas. Who knows what their secret ingredient will be! We look forward to Creative Cooks 201 which begins September 30th.  There will also be a beginning class, Creative Cooks 101, beginning September 23. Check out our classes online and join these great cooks!

Thank you, Karen King, for sharing your experiences in the 21 Acres Kitchen with us! 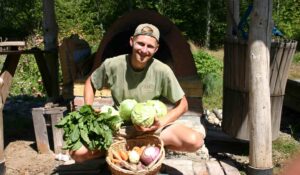